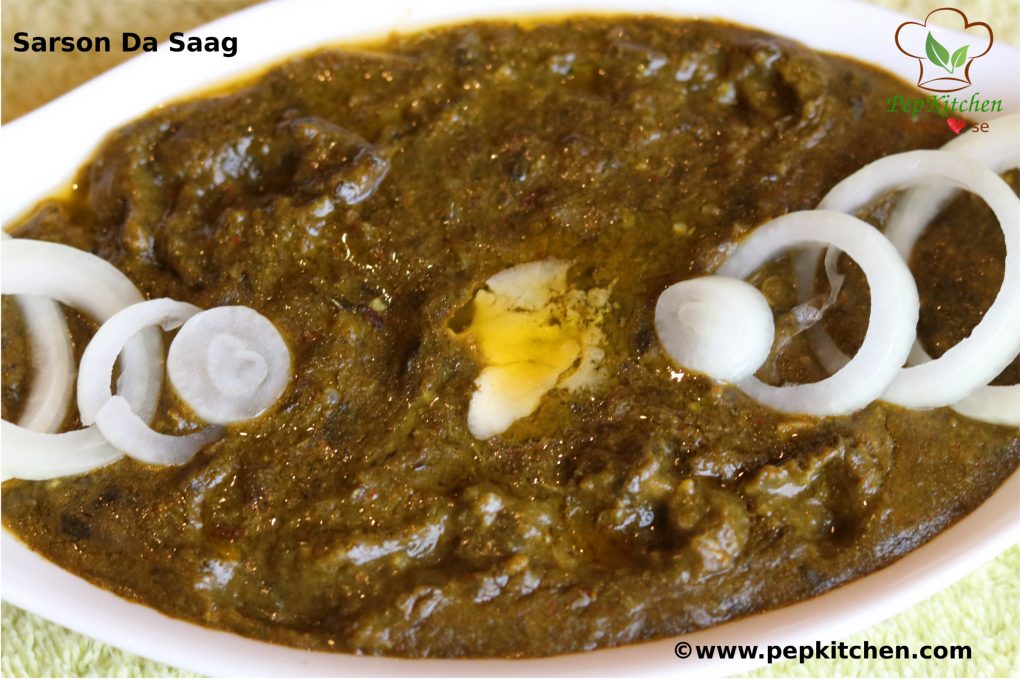 Sarson da saag is a curry made using fresh mustard greens along with other greens such as spinach, fenugreek leaves, bathua leaves, or kale. The curry is flavored with a tempering made with ghee, onions, ginger, garlic and green chili. It is made specially during winters and served with makki ki roti (cornmeal flatbread). It is everyday meal made in villages of North India. It is gluten free. To make it vegan avoid adding ghee and butter and use oil instead. 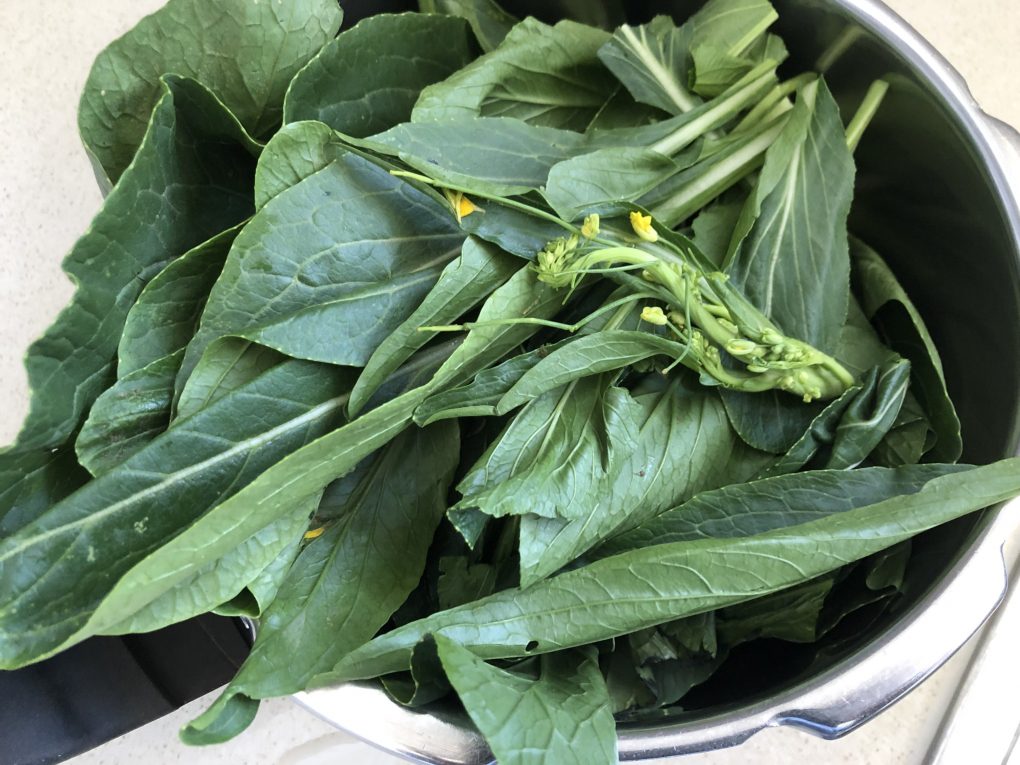 “Sarson” is the fresh mustard green leaves as shown above. It is grown from mustard seeds. It is available in abundance in winters in India. Sarson da saag means a creamy curry made from fresh mustard greens. Since the flavor of sarson is somewhat bitter, it is combined with other greens such as spinach, kale, radish leaves, methi (fenugreek leaves), bathua (chenopodium) and cooked. Generally in India, sarson, spinach and bathua are cooked together. However it is difficult to get these leaves everywhere and hence you can use sarson along with spinach. I am in Sydney and I got this sarson leaves from an Indian grocery store. You can also find them in some Asian shops. I have cooked them with spinach leaves. You can also use Kale leaves.

My husband loves saron da saag. It reminds us of our golden days in Pune. We started our married life there and we were there for 8 years. We used to go to a small joint named “Lovely” in Wanaworie (Pune) and used to relish piping hot sarson da saag along with Makki ki roti over there in winters. The joint was owned by a Punjabi family and the taste of the food was really authentic.

This time my mom was here with us in Sydney. We had gone to an Indian shop for our grocery shopping. I was so happy to see the sarson leaves and bought them. Cooking sarson da saag is very easy and does not need any elaborate procedure or any fancy gadgets. “Sarson da saag” is a popular dish cooked in villages of North India.

Once the greens are cleaned cook them along with ginger, garlic, green chili and water. Cook in the pot along with water till they are soft. Or cook in pressure cooker to be more quicker. I have pressure cooked them. (I can’t imagine me and my kitchen without a pressure cooker). Now once the green are cooked grind them coarsely using a grinder or hand blender. Add maize flour to it and simmer the mixture for 25 minutes. The maize flour would thicken the mixture as it simmers.  In villages, when there were no gadgets, a hand whisk or ravai that is used to make butter milk was used to mash the green. Women used to constantly stir the greens with the whisk while adding  maize flour to it.  This way the greens leaves would be mashed coarsely.

I have used jowar or sorghum flour in place of maize flour. It is a good substitute when you do not have maize flour.

The gravy at this stage can be freezed in a zip lock bag and used as needed.

The most important stage is making tempering or tadka for the curry or saag. You can prepare the curry and keep and then prepare tadka before serving.

I prefer using ghee to make tadka. However, to make it vegan use oil in place of ghee. Make tadka using onions, ginger, garlic, and green chili and cook the prepared saag in it. The flavor will be enriched. Add butter to the prepared saag and serve it hot with makki ki roti /cornmeal flatbread.

I have chopped the onions, ginger, garlic and green chili very finely using wonderchef string pull chopper. My son would eat it without any fuss that way. 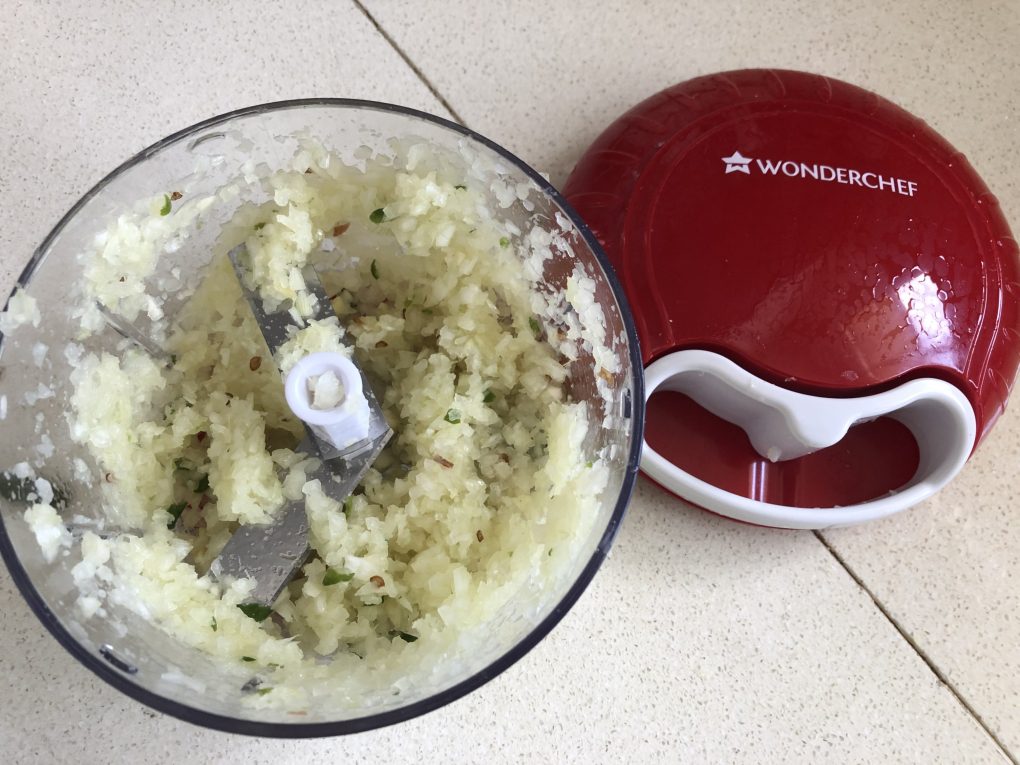 We prefer to eat less spicy food. However you can add chilies as per the spice level you need. 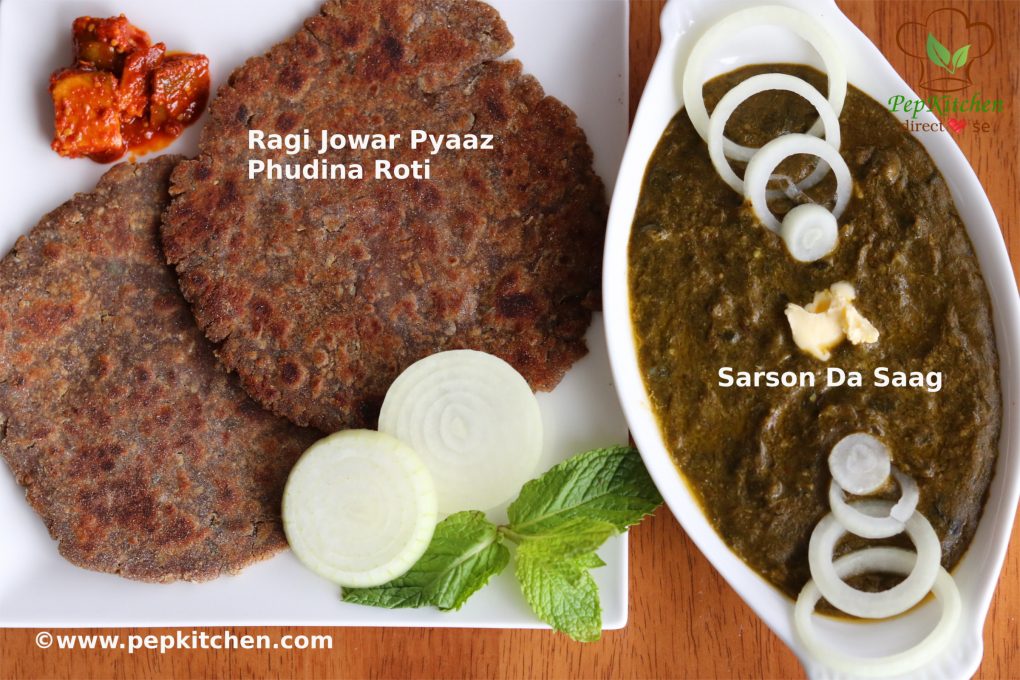 Friends do make this tempting recipes and enjoy with your family and friends. 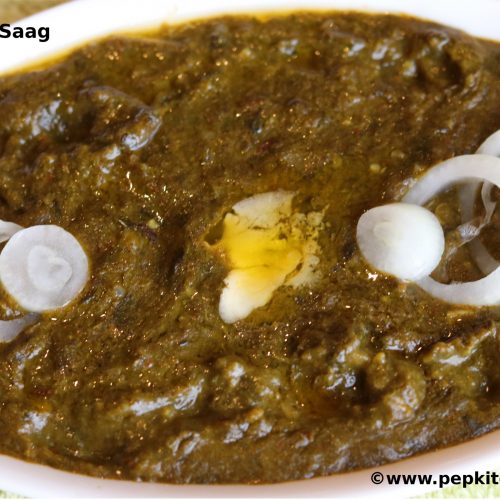