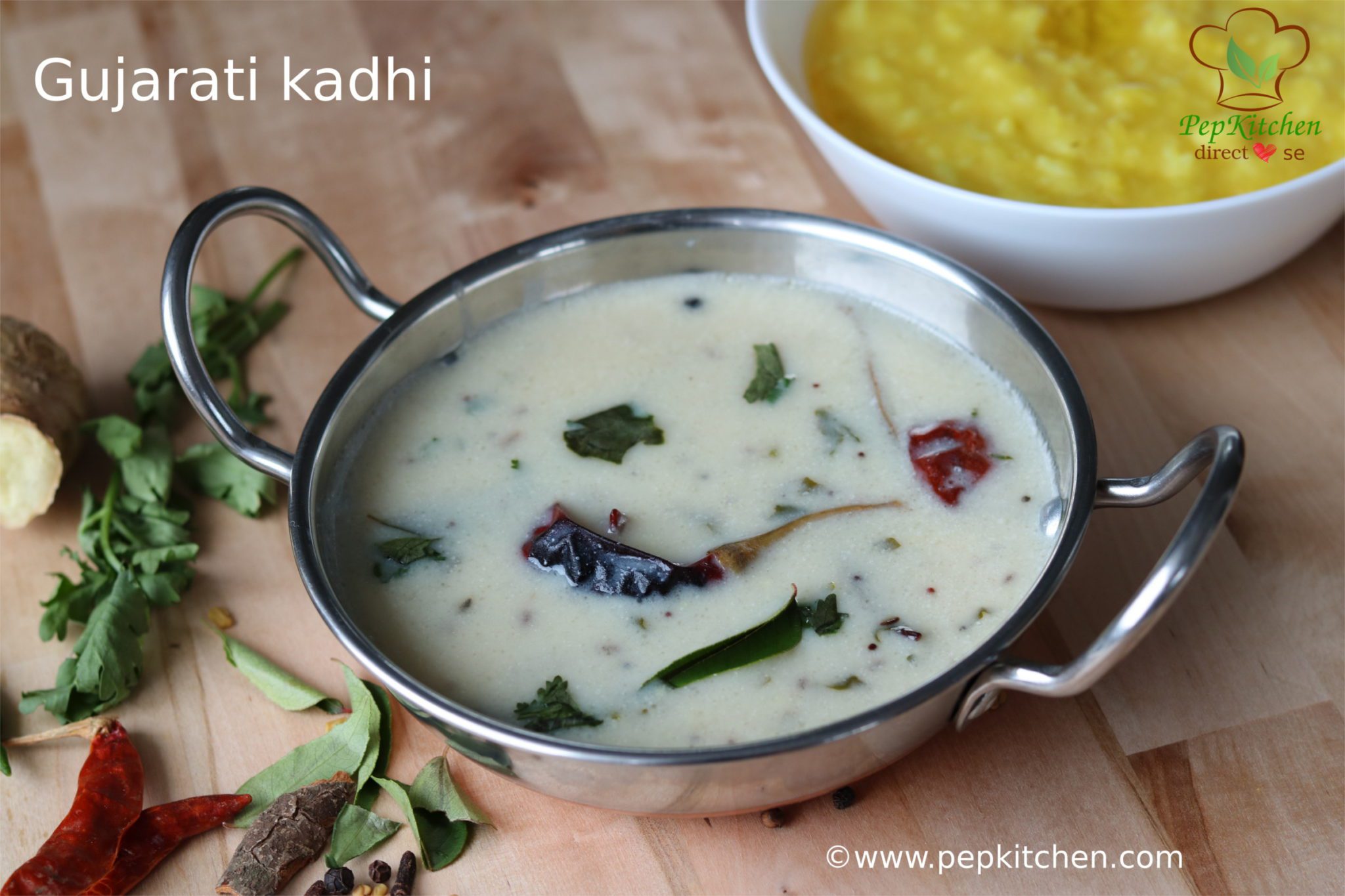 Gujarati Kadhi is a dish made with chickpea flour (besan) and yogurt(dahi). It has a balance of sour and sweet taste and is also a little spicy.

Kadhi is prepared in various regions of India. The taste and method of making differ from place to place. We have Punjabi Kadhi, Maharashtrian kadhi, Kathiyawadi kadhi, and Sindhi kadhi.

Gujarati kadhi is thin and sweet compared to Punjabi kadhi which is thick and sour. Pakoras or fritters are added to Punjabi Kadhi but sugar is not added.

Some people prefer adding turmeric to Gujarati kadhi to give it a nice lemon yellow colour. My mother prepares kadhi with turmeric in it. My mother in law does not use turmeric while making kadhi.

Kadhi is very quick and can be made within 20 minutes. It does not require any process of soaking, grinding, fermenting. Mix yogurt and chickpea flour and make a liquid mixture by adding buttermilk to it. Prepare the tempering with ghee and spices such as cinnamon, cloves, peppercorn, methi seeds, bay leaf, mustard seeds, cumin seeds, dry red chili, curry leaves and hing. Add the liquid mixture and simmer until it gets little thicker and the chickpea flour is cooked. The kadhi comes out perfect if the tempering of spices is done properly. The spices, curry leaves, hing release a very tempting aroma while they are being roasted in ghee during the tempering process. Some people prefer to pour the tempering in the end, after the yogurt and chickpea flour mixture is simmered. I first make the tempering and then cook the liquid mixture in it. The house is full of aroma when the kadhi is being cooked.

The older generation had a thumb rule to check whether the kadhi is cooked properly. The kadhi is considered cooked perfectly if cooked for 6-7 boils!! I follow the same thumb rule.

At our place, my mother in law serves it with “moong ni chhuti dal” or “val ni dal”, and rice.

Both my mother and mother in law also serve it with puran poli. Puran poli is sweet, so the taste is balanced with this sour, sweet and spicy kadhi. They make a good combination. We prefer making kadhi at least once a week.

I still remember and always tell my son how my father would drink 2-3 katori(small bowls) of kadhi before lunch when my mother made it as if it were soup. He tells that kadhi has the flavors of cinnamon, ginger, peppercorn, and cloves. They get boiled and their flavors get infused in the kadhi. This kadhi is good to drink hot when one has cough and cold. My father would thus like it to drink hot kadhi in winters.

Gujarati Kadhi is a dish made with chickpea flour (besan) and yogurt(dahi). It is balanced with sour and sweet taste and is little spicy. It is made within 20 minutes and is served hot with plain rice, khichdi, puran poli, pulav or plain chapati.
Course Main Dish
Cuisine Gujarati, Indian
Prep Time 5 minutes
Cook Time 15 minutes
Total Time 20 minutes
Servings 3 people
Calories 115kcal

Do not cook the kadhi on high heat to prevent it from curdling.